Below you can read about typical race day weather, Jordan's climate, and see the average weather conditions in Amman and Wadi Musa (Petra). 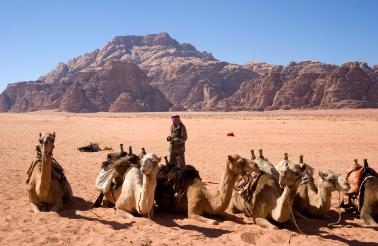 For such a small country, Jordan has a wide range of climates. The common factor is aridity - the majority of the country is generally arid. The west of the country has a more Mediterranean climate, while the east and the south is primarily desert. The areas on the plateau are up at alititude, such as Amman and Petra, and thus have more mild climates, but the summers can still reach scorching temperatures with very little rain.

See the average temperatures and precipitation per month below in the tables.

Wadi Rum: Wadi Rum part of the Eastern Desert and not the Mountain Heights Plateau, and subsequently it is hotter than Petra and Amman. In the summer, temperatures are over 30°C on average. The average night time temperature is approximately 10 degrees less than the daytime temperature. The air is extremely dry, which contributes to the sudden fluctuations in temperature (that is, when the sun goes down, it gets cold very quickly). 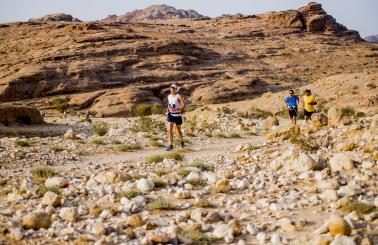 As one might expect, the Petra Desert Marathon will be hot. Jordan is one of the driest countries in the world, so the chances of rain on race day are practically nonexistent. Temperatures on the route can reach as high as 35°C, but we start early in the morning to avoid the worst of the heat. However, the temperature itself is not the most critical point - sun exposure is. Even if the temperatures are below 30°C, the sun can be relentless and can cause heat exhaustion or heat stroke. While hydration certainly helps, a key factor in preventing this is keeping the sun off of your skin - perhaps through the use of hats, buffs, bandanas, or longer clothing. And don't forget your sunscreen!